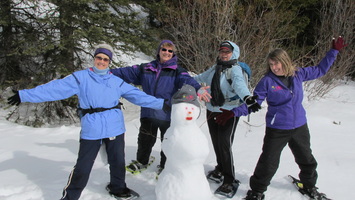 On a warm (high 30s and 40s) lightly snowing and breezy day, the GIG headed to Teton Pass Ski Resort, an hour out of Choteau.  From car conversations of dieting, juicing and the grotesqueness of meat-packing plants to the wonder of the mountains surrounding us, 15 gals crammed into three cars for the four or five-mile trek that ended in a homey meal at the ski resort lodge.

The hike started at the ski resort with a steep climb part-way up one of the groomed runs, before we followed the blue diamonds indicating the cross-country ski trail through the trees and side hills, which posed a challenge as no one had broken trail. We ended up with a five-mile, rather than the full six-mile hike.

Then at the bottom near the creek and the old logging road, now turned trail, some left to return two miles to the lodge, while eight brave gals went off trail and headed to the upper bowl at the base of Mount Lockhart.  We didn't quite make it to the tree line, but almost.

When the second group returned to the logging road, we discovered the first group had made a snow GIG! We all met up at the lodge to order food or eat the lunch we had brought. Everyone raved about the rosemary French fries, but we all agreed after the 2400 feet of elevation gain, just about anything would taste good.

This hike welcomed Michelle, Anita and Brianna, who had signed up for several earlier hikes that had never panned out due to weather or other complications.
We left at 8:15 a.m. and returned around 4 p.m
Who went: Kathy D, Gail, Toni, Jeanne, Brenda, Anita, Doris, Katie, Kathy M, Brianna, Michelle, Jessica M, Lisa, Susan, Bonnie
Link to Kathy's pictures