Powerline to Highway, March 7, 2021: KuntZ's first time for Powerline has her pretending to rescue children 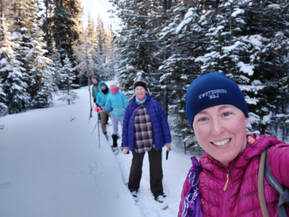 We were blinded by the light on the way up to Kings Hill to start our moderately easy snowshoe with Sheila in tow for her first ever try at duck walking. The rising sun really shone in our eyes as we left town at just after 8 a.m., making one stop at Cougar Canyon to pick up Kalah.  Choosing a start time is a balance between making sure the snowplow has gotten through, that it's not too cold to start versus lots of traffic headed to ski at Showdown or snowmobile the trails; Finding a place to park is another consideration, especially since we are driving in more vehicles than normal due to COVID-19.

We divided into two groups, again, due to COVID-19, a virus that has taken over our lives in many ways. One group was contained the trailbreakers. The others would follow in their footsteps, having an easier go of it.

The first part of the trail that heads through the campground was piled with drifting snow. Out front, Kalah had to use her hands to lift her legs out at times it was so deep.  But once we got into the trees, the snow depth lessened, allowing the first group to fly down the trail, finishing almost an hour ahead of the second group. It was quite chilly before the sun peeked its head out from behind the mountains and trees, so, luckily, Maria has handwarmers to share.

Nothing else eventful happened: we didn't run into many skiers or boarders when the trails connected to the downhill section; we didn't run into any snowmobiles on their trail; no one got lost, even though we were the first to go down the loop portion of the trail.

Note: Central Montana has had several wind events lately, with gusts over 70 mph, causing many trees to fall. Katie's husband went the 747 trail and reported taking an extra hour navigating all the deadfall. Likewise, Jasmine went the Deadman trail and reported she would need several people with chainsaws to remove all the downed trees. Camille skied Silver Crest and had to negotiate over 26 fallen logs. However, this loop, which includes the top part of O'Brien Creek and first of Ranch Creek, did not have any trees down. 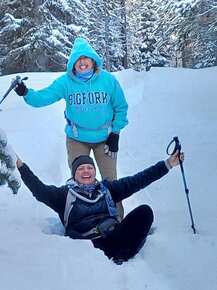 The day started at 8 a.m. before we picked up Kalah in Monarch 45 minutes later. As we pulled to the top of Kings Hill, the chill really set in: this was a wintry day, so we quickly geared up and hit the trail. We were the only car in the lot.  Luckily, by the time we hit the Showdown trails, the sun came out from behind the mountain, giving a bit of warmth to this frosty day.  And the sun set the snowy trees to sparkling, making the day magical.

The snow was very deep with Kalah breaking trail for about 80 percent of the way before Amber took over as Kalah finally said she needed a break. The snow was over our knees, causing a fall or two, but all in fun. No one got hurt.  On this stretch of the O'Brien Creek trail, a snowmobile had breached etiquette and dug up the back country quiet trail. One spot we could see he got stuck and dug himself into a huge pit of snow.

Carol had her first experience looking up at the Powerline, wondering just how hard it was to go up it. But she also got to try out her televators to see how much easier it is to climb when using them.

We finished before 12:30 p.m. getting back to a full lot instead of the empty one we had when we arrived. We got back to town by 2 p.m., a very fast day with great trailbreakers. 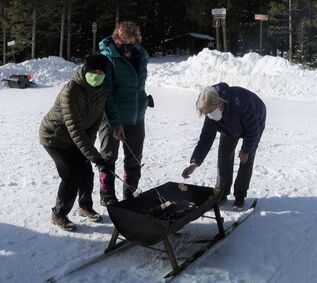 The New Year's adventure started out at 8:30 a.m. as we headed toward Silvercrest Ski area for the first snowshoe of 2021.

We had great roads and arrived to find only a few cars in the parking lot. Katie was going to keep a fire going for us as she could not do the trail with us because of a broken toe injury.

We decided to go the opposite route that we usually do because we thought it would be easier. We were wrong, it was just as much of an incline.  The trail was very nice, packed and not many rocks or tree roots. As we enjoyed the blue bird day with not much wind, we took a short break at the warming hut and headed back to the parking lot. There were many more cars and some enjoying a picnic on the snow with little children.

Katie had just the right amount of coals to roast marshmallows for S’mores. Everyone enjoyed a long forgotten treat of our youth and toasted with Champagne to the New Year. We headed back to town and we’re glad to spend time with friends and to enjoy Montana in the winter.
​
Note: on the way home, we were stopped due to a car accident, a really bad one with an almost unrecognizable vehicle lying among the trees. We later heard it was a fatal accident that happened the day before only discovered at 11 a.m. on New Year's Day.