Gals Hike the Falls: Morrell and Holland Lake among the Larch 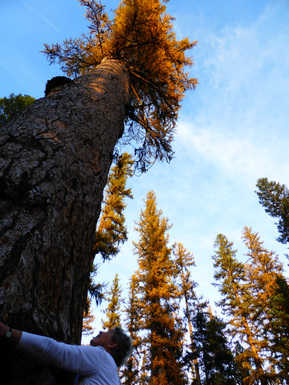 The golden larch didn't disappoint on our trip to the Seeley lake area for two hikes: a four miler to Morrell Falls and then a three miler to Holland Lake Falls. (special thanks to Mary for suggesting Holland Lake).

We left Great Falls around 6:30 a.m. and faced fog and construction on the way, putting us a bit later than expected, but the fog was still with us for the full Morrell Falls hike. For the most part, the trail was empty as  we only met three other parties, but we had the falls to ourselves.  The two unnamed ponds on the way to the falls were gorgeous reflecting ponds for the yellow tamaracks that surrounded them. One held a beaver who gave us a show as he dived and swam through the glass-like water.

We ate lunch at the falls but decided to pass on the rather steep hike above the falls, due to the wet conditions from the prior night's rain that left the trail a bit slippery.

We finished the hike around 2 p.m., so we decided to head up the road 20 miles for a second hike to Holland Lake Falls. The drive was well worth it, again with the golden glory of the Western larch groves contrasting with the snow in the Mission Mountains.

The hike to Holland Lake Falls was even more beautiful with the trail going uphill, revealing views of the lake and mountains behind. By the end of the hike, the fog finally lifted to reveal blue sunny skies. But by now, it was almost 5 p.m.

We met a few more people along the lake trail; however, we again had the falls to ourselves, except for the shots of hunting season we could hear in the distance.

We ended the day by dropping off Mary at her cabin--her husband had been waiting awhile, since he didn't know about our second hike. Mary had earlier given us a tour of her wonderful cabin, located on the shore of Seeley Lake. It was by far the best "potty" stop the GiG has ever had.

After dropping Mary off, we stopped once more, this time to see the largest larch in the land: Gus.  He is so large that it took four and a half gals holding hands to encircle him.  Some of the gals accused Kathy D of making up the name "Gus" for the tree, but two other visitors proved to the skeptics that the tree really was referred to as Gus.  See this site for more information. Those who had seen Gus before  hadn't seen him dressed in gold, so it was a great side trip before heading to Lincoln for dinner at Lambkins.

We arrived back in Great Falls around 10 p.m.