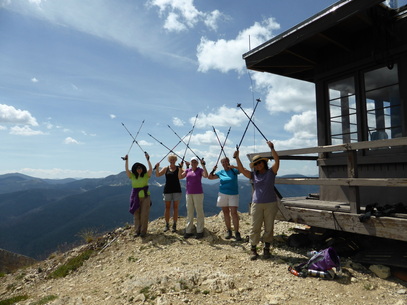 The biggest adventure yet for the five gals who braved a creek crossing and almost 3,000 feet of elevation gain over 12 miles, Patrol Mountain lookout didn't disappoint in difficulty, scenery or camaraderie.

As we assembled our pack and headed out, we noticed that the trail sign "lied," stating it was only five miles to the lookout, when in fact we knew it was six from several GPS calculations. From there, it was an easy trek along the first 2.5 miles, which hugs Straight Creek with a few gentle ups and downs along the way. However,, the cool weather and recent rain which dampened our pant legs and boots, gave us a chill.   At the crossing, the trail splits, going into the Scapegoat one way (to the left), and down to the creek and Patrol Mountain trail to the right.


After a quick change into sandals/Keens, we crossed, the very cold creek, making us even more freezing after the damp first part of the hike, but that would soon change as the trail takes a rapid ascent once across the creek.  After changing back into our boots, we stashed our sandals/Keens in some bushes and set out to conquer the mountain!


At this point, we only had 3.5 miles to go but it does seem more like 6 with the steep uphill all of the way, with only a small respite. At the 2.75 mile mark, we came upon Honeymoon Basin, an area high on the mountain carved out into a basin.  This flat area held a host of wildflowers: sweetvetch, groundsel, fireweed, bear grass, Indian paintbrush, goldenrod, harebells and yarrow. In this beautiful meadowed area, we ate our lunch and rested up for the final ascent.  After a half hour, we decided the honeymoon was over, and it was time to make our final ascent of the very alpine part of the hike.


The next section, changed rapidly from forest to alpine, the scree and shale giving our feet a beating but being above the treeline produced fabulous views in the Bob Marshall and Scapegoat Wilderness areas.  For miles we could see nothing but mountains for 360 degrees.

About a quarter mile from the Honeymoon Basin, the lookout tower came into view, giving us hope that yes, we could make it to the top, despite our weary legs telling us otherwise.

There was one more surprise for the GiG: we had to cross a narrow saddle with steep drop-offs on both sides. Although a few felt dizzy crossing over, we all made it and again were floored at the wonderful views.

As we approached the lookout, Rye, a blue healer who belongs to Sam Sarah Chapman, the gal who "mans" the Patrol Mountain lookout tower, started barking to announce our approach.

At the Lookout, we all signed the register and saw some familiar Great Falls names as well as MWA hike leader Len Kopec also listed.  Sam Sarah gave us a narrative about her life in the lookout, how she gets resupplied, what she does on her days off (hike!), and how her Osborne Fire Finder works (it was made in the 1930s).

At 2 p.m., we put our packs back on and said our goodbyes.  It was a long trek back down the mountain but the stream crossing felt good this time.  Some of the gals felt the hike was a once-in-lifetime type of hike: great to do but don't want to go twice. Susan reminded everyone that we will need to take Kathy M next year since she missed it this year.

We arrived back at the car just before 6 p.m. and headed to Augusta for dinner, deciding on the Lazy B for fish and chips, sweet potato fries and burgers.  Catherine felt we needed to celebrate in a big way, so she asked about the alcohol menu. When the waitress said they had a full-service bar, she ordered Champagne for all of us! What a treat. But maybe we deserved it because as she said about Patrol Mountain:"It kicked our butts. Both cheeks"~Catherine