The group ranged in age from teenager and foreign-exchange student Pat'a to Doris who is celebrating her 50th wedding anniversary.  We also ranged from very experienced snowshoers and skiers to two first-timers.

The loop starts at the top of King's Hill in the South parking lot, following the blue diamonds of the back-country ski trail for Ranch Creek and O'Brien Creek. But instead of shooting down the trees at the O'Brien trail, just after hitting the Golden Goose run of Showdown, we continued up the cat track toward Porphyry Peak Lookout.

Before the last curve, we shot through a shoot in the trees, going, down, down until we hit the snowmobile road. At the road we took our group photo before following the road a quarter mile and turning South toward Porphyry again, but not before Katie gave everyone a scare by having our trail-breaker, Maddie, turn too soon at the ski sign. We spent 15 minutes hunting around for blue diamonds, until Christi K found the trail and got us headed back in the right direction. Hopefully, no one was too worried about Katie's brain fog on the turn.

It only makes sense: The sign is a warning to snowmobiles that skiers will be crossing their trail, so the trail would logically come some feet AFTER the sign, giving the drivers warning BEFORE the skiers enter the trail. Katie started right at the sign, so let this be a warning to others who want to go on this loop: do not turn too soon. The ski trail is quite obvious cut up the mountain to the right.

After finally finding the trail, we went backward up the O'Brien trail until we arrived once again at Showdown and the final descent back to the cars.

We hit the trail by ten and ended the day at just after one, followed by a lunch at Bob's Bar in Neihart, arriving back in Great Falls at 3:30.

A special thank you to our drivers, Gail and Jeanne. 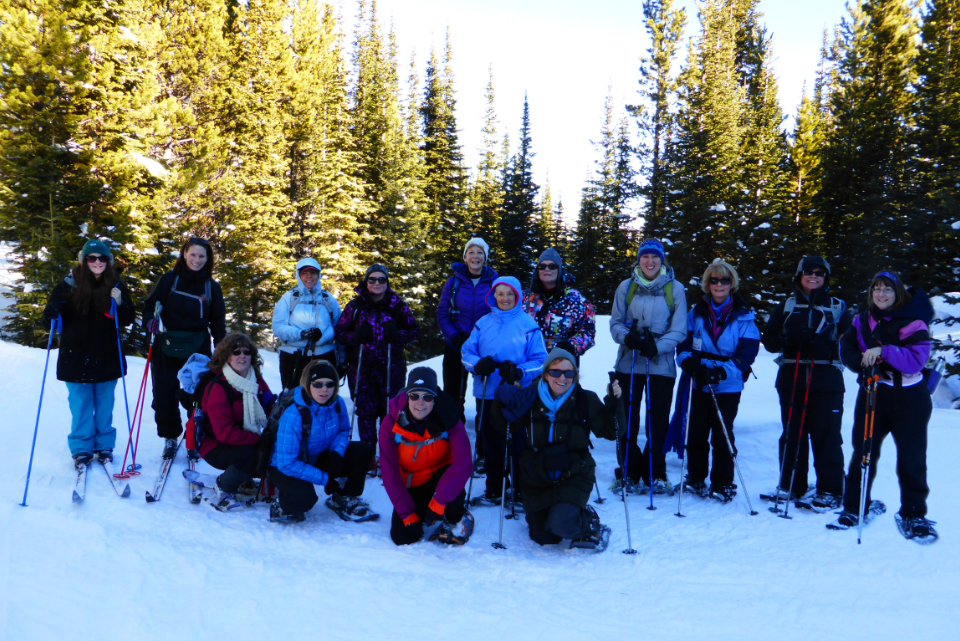