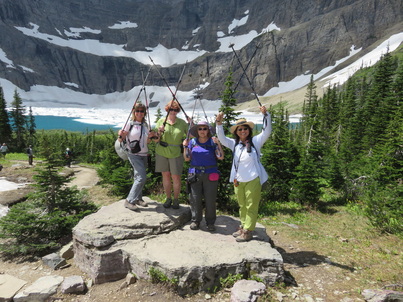 The Girls in Glacier were ready for another adventure as we left Great Falls to drive to Many Glacier. As we drove out of town, we were greeted with the glorious sunrise to the east. Upon arrival at Swiftcurrent, the ladies got their gear together and met at the trail head to discuss our plans.  We all started at the trail head and stopped for a snack at Ptarmigan Falls. Once leaving Ptarmigan Falls, Mary, Chrissie, Sue, and Susan split off from our group to go to Ptarmigan Tunnel, and the rest of us,  Beth, Gail, Brenda, Toni, Sara, Catherine, & Kathy M, continued on to Iceberg Lake.

As the day got warmer, we were thankful for the gentle breeze which made the hike a bit more bearable in the heat. Wildflowers were plentiful along the way, although it looked like it was getting to the end of the season for the Beargrass. The Indian Paintbrush were plentiful in a wild array of colors from pink, salmon, orange, red, and even fuchsia. We even saw a few new flowers that we had not seen before.

Once we arrived at the lake, the ladies were stunned by the intense teal blue color of the lake but disappointed that the floating "icebergs" were too far away for those who would be brave enough to attempt a chance to stand on one. However, the wind came up, and it became quite chilly at the lake, so we donned our jackets to keep us warm while we ate our lunch with little chipmunks to keep us entertained. One even scared Beth as he ran between her legs as she sat on the rocks eating her lunch! Later, we hiked towards the northern part of the lake and  two young men bolstered with testosterone and a bit of bravado wanted to "show off" for their girlfriends. All four stripped down to their bikinis and swim shorts and there was might bold talk about a $100 bet from the guys about swimming to one of the icebergs. One of the guys dove into the water and made an attempt to swim, but he didn't get to far since the water was bitterly cold. He quickly turned around and went back to shore. The other guy made somewhat of an attempt, but he turned around as well. So much for that!

As we hit the trail to head back to Swiftcurrent Inn, we stopped once in a while to visit with other hikers along the way. One of the hikers notified us of a bear in the area, so we were hyper-vigilant about our surroundings. Sure enough, we saw a bear lumbering along parallel to the trail approximately 20 yards away. We wondered if it was a grizzly bear because we noticed that he had a hump on his upper back, but after reporting the sighting to the ranger, he said that it was a black bear with tawny coloring.

After seeing the bear, we looked below the trail and saw a beautiful black moose coming out of the timber. His coat glistened in the sun and his horns were in velvet. What a sight to behold! As we continued down the trail, the Ptarmigan Tunnel ladies met us on the trail so we all met up with perfect timing. Once we got back to Swiftcurrent Inn, we made reservations for dinner. The restaurant was full, so we had to reserve three separate tables to accommodate all of us. After a nice dinner, some of the ladies opted for the soft-serve huckleberry yogurt ice cream at the Swiftcurrent store. It was a long day, and we arrived back in Great Falls around 10:30 p. m. What a great day!

P.S. It was a personal best for Toni and she got her 100-miler club mug!

What an awesome hike. We hit the trail with Sue M. leading the way. She set a fast pace as she was remembering last years sun beating down on them. Fortunately we had a lovely breeze the entire hike with Mary very accurately predicting our arrival times.

The bear grass was spectacular and we felt like we were walking down a decorated aisle not a hiking trail! God is an awesome gardener!

Susan W. had decided to join us instead of going to Iceberg Lake and she just laughed with joy all the way up and back. This was Chrissie's first attempt and the other 3 kept reminding her of how miserable they had been in the heat last year.  Susan was so glad she decided to try this hike again.

On the back side of the tunnel we were afforded a spectacular view of Elizabeth Lake and Old Sun Glacier, not to mention the layers of curved and severed rock formations in the mountain we had just come through!

You would think that would be enough to take in for a hike but as we came down we bumped into a teenage male moose (his mini-rack kind of gave us an idea). He just ignored us as the vittles were much more interesting! We could literally hear his teeth crunching we were so close!  Just beyond the pit toilet we bumped into the rest of our crew that had gone to Iceberg Lake.  We were excited to be going out together...but our excitement was interrupted by a bear sighting! Some 50 feet above the trail a 'tawny brown colored' bear was sitting on his haunches enjoying the view and 'posing' for our cameras. After a few minutes he sauntered off into the bushes. The ranger said he was a tawny black bear, but there was discussion that it could have been a grizzly. It did have a hump, just saying!
We hadn't been 5 minutes further down the trail when someone said, "there's a moose". This guy was big and had a rack to brag about. Fortunately, he was quite a ways down the mountain side and also more interested in eating. He did look our way a few times as if to say, "What are you guys looking at?" I could see him clearly in the binoculars but my wimpy telephoto lens did allow me to get a few pictures. Despite the animal distracting delays we made it back by 5!

We finished our day with a great meal at Swift Current Inn.​