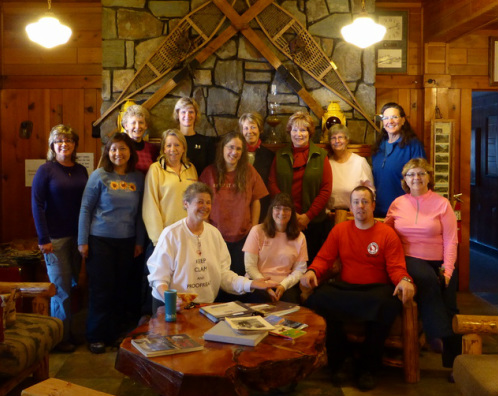 Laughter punctuated by lots of uphill climbs and a soak or two in the hot tub filled our three days in Essex, as we stayed at the Izaak Walton Inn.

Thirteen gals piled into two vans, one taking off Friday morning and the other at 3:30 p.m. after work, while Shelly, our number 14, drove from Kalispell on her own. Kathy D (a.m.) and Catherine (p.m.) graciously agreed to drive the rest of us.

The a.m. crew  stopped at Marias Pass to climb partway up Flattop Mountain, going about 2.5 miles. Along the way, we saw moose tracks and droppings as well as griz tracks! We wanted to get to the top of the mountain. However, weather moved in with wet snow and lots of wind, so we decided we better head to the Izaak Walton and check in instead.

Once there, we settled our gear and ate an early dinner so that we could eat off the lunch menu, but we discovered that the menu had just changed so we had to modify our original choices. Then we took a hike along the trails at the Izaak Walton and a few gals took a soak in the hot tub. We ordered box lunches for the next day and made dinner reservations for the gals who were arriving around 7:30 p.m..  When the afternoon van arrived, we joined them for dessert and had the inn staff build a fire and enjoyed a hot toddy (remember the Milky Ways, the Modified Ski Jump: cocoa and butterscotch Schnapps with caramel). Kathy M brought wine and cheese and others had other snacks and trail mixes to share.

It was up for breakfast at 7 a.m. the next day and off to West Glacier, but we didn't get too far due to a spring snow storm that quickly dropped six inches of slush, which we couldn't drive through without risk. So we turned around 15 miles down the road and snowshoed the Essex trails instead, taking the 3.5 mile loop that started on the Essex Creek Trail, then proceeded to the Towering Pines Trail and finally ending on the Pileated Trail. The beauty of the creek and Essex Falls was breathtaking. And the abundance of moose tracks and droppings led us to believe the moose enjoyed the trail as much as we did. After the hike, a few headed to the hot tub, while Katie, Tammy and Kathy M took a 3.5-mile ski. It was very icy and afraid of falls, Kathy and Katie walked down one hill, but Tammy braved it and made it the whole way on skis.

We ate an early dinner again and created some excitement in the dining car: Bill, our waiter for most meals,  wasn't sure what to make of us--especially Toni--as we always asked him for separate checks, couldn't figure out how to split a bill (although he rightfully pointed out that teachers should be able to do math), and finally when Toni asked him to pose like page 57 on the Montana Women Magazine (that should sell them a few copies as everyone will want to take a look), he turned the color of his red shirt. The manager said we were doing a good job breaking him in as he had only been on the job for one week, and it had been slow during the shoulder season.

After our early dinner/late lunch, the group headed out for 1.5 mile snowshoe, with one group taking a level trail while  the other one went uphill in search of Kelsi's Cliff, where the promotional photos of the Inn are taken, but they couldn't find the trail in the snow, so they had to settle for a few views of the mountains and the satisfaction of some elevation gain to work off their dinner.

It was back again for desserts of huckleberry cobbler, hot chocolate pudding cake with ice cream and the special of a hot chocolate-chip cookie, baked in a mini cast-iron pan with ice-cream and chocolate sauce.

Sunday, it was back up by 7 a.m. for an early breakfast and the last time to tease Bill and say bye to MIchelle, the manager as she heads out to another job at the Awani in Yosemite or the spa in Sedona. At 8:30, we loaded into the cars for the short drive to the Walton Ranger Station for a hike up Ole Creek and across the hanging bridge.  All of the gals put on their big-girl panties and crossed without a hitch. While one group made it the 2.2 miles to the fork in the trail, with the left going along the South Boundary Trail that ends at West Glacier and the other direction (right) to Ole Creek and eventually East Glacier, one group headed back with stops along the way to see where Ole Creek enters the Middle Fork of the Flathead and another stop along the bank of the Flathead. The tracks this time were cat! Not a large one, but perhaps a bobcat or young mountain lion chasing the rabbits, which left many tracks across the trail, in and out of tree wells.

Then back to the hotel to do the final pack and check out at noon. It was a minor miracle that no one lost any keys, as the cost is $25, and we were constantly checking each other to make sure not one was misplaced.

On the way home, we stopped at the Two Med Grill, where we hit up Laurie for lattes and muffins and a trip through the Mercantile to buy souvenirs, snacks and books. We ran into Bruce Cusker, former fellow teacher, turned substitute, who warned us of horses on the road out of Browning.

We arrived home by 3:30, tired and hungry but happy to be home, with no mishaps with horses.
Trail map link