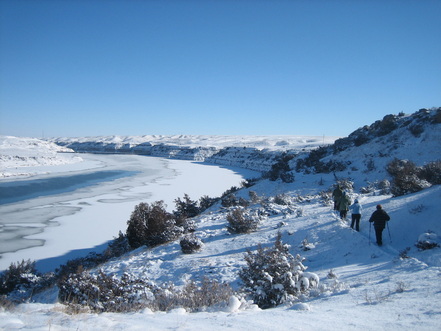 Even though we had to ditch our  Flescher pass snowshoe hike due to horribly icy roads, the "girls" still got out on this cold, but sunny, day.

Six gals (Kathy M, Gail, Susan, Jeanne, Roni,  Katie) braved the zero-16 degree weather to hike the eight miles to Cochrane dam, which started out as a short hike along the River's Edge Trail, but Susan's encouragement (we're almost there:), kept us going.  We started at 9 a.m. and finished by 2:30, which indicates that we had much snow to break on the trail.

We saw many animal tracks, a few human and dog and happened upon two groups on our way back, both happy we broke trail for them.

We saw several bald eagles perched in a tree, and one eagle flew gracefully, and slowly, down the river right by us.

Below both Rainbow and Cochrane, we saw thousands of geese that all put up a huge squawk as we approached. They kept their distance by swimming down river as we drew near.

We enjoyed seeing the new power house at Rainbow and comparing it with the old one, that is about three times as large with many windows, a very beautiful, but now defunct, building. The new one looks like a block made of cinder blocks in comparison. Info on Rainbow Dam and the new powerhouse.

None of us had water or snacks, so by the time we were finished with the hike, we were ready to rehydrate and enjoy a super lunch at Dante's.